Late blight is a serious disease of potato family (Solanaceous) crops worldwide, caused by the pathogen Phytophthora infestans. Late blight is favored by high humidity, dew, wet weather and moderate temperatures (50 to 80°F).  When the environment is favorable, the disease can spread quickly and can defoliate fields within 3 weeks. Late blight affects foliage of both potato and tomato as well as potato tubers and tomato fruit.

The first steps in managing any pest are 1) identifying it when you encounter it in the field, and 2) understanding its life cycle so you can exploit its weaknesses.  For more information on Phythophthora infestans/late blight diagnostics and life cycle, see the Michigan State (Kirk et al., 2004) Extension bulletin referenced at the end of this article. 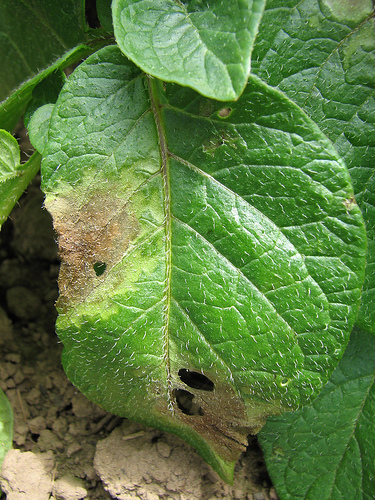 Destroy all sources of inoculum

In most areas of the US, the late blight pathogen is an obligate parasite, meaning that it can only survive in living plant tissue.  Therefore, destruction of all living hosts of the pathogen is an important control strategy. This means destroying all cull piles and volunteer hosts (potato, tomato, eggplant, pepper), including hairy nightshade. Waste potatoes can be fed to animals, buried 2 feet deep, composted, or spread on the surface of the soil to be frozen during the winter months. Volunteer potatoes and tomatoes should be removed by cultivation.

Choose fields with good air movement and well drained soils.  Do not plant susceptible crops in fields: 1)  in which host plants may volunteer/grow (volunteer seedlings of host crops or weeds/hairy nightshade); 2) next to cull piles of tomatoes or potatoes; or 3) shaded by trees or structures. 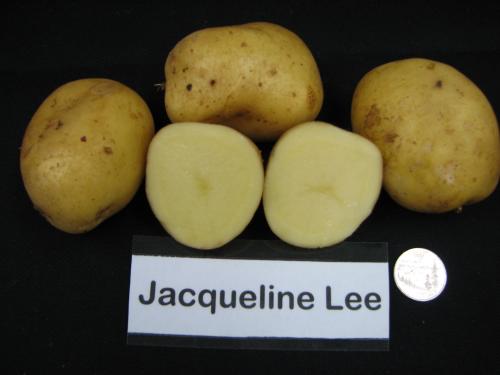 Manipulation of planting date to manage late blight will depend on local conditions and risk periods.  In areas where the highest likelihood of late blight onset is late in the season, plant short season varieties early so foliage has died back before high risk periods begin. If risk is highest during the spring, plant later to avoid spring epidemics. If risk occurs throughout the growing season, planting timing is unlikely to reduce disease risk. However, spacing planting dates from early to late might help spread risk across plantings. Spatially separating plantings will reduce the risk of late blight spread from planting to planting.

During the Production Season

Late blight epidemics are much more likely to occur during periods of extended leaf wetness. Therefore, production of tomatoes in high tunnels with drip irrigation should dramatically reduce late blight risk by eliminating the contribution of rain and overhead irrigation to leaf wetness.  Potatoes are not typically grown in protected culture, but if late blight is a serious problem and the crop has high value (specialty potatoes, retail market), protected culture might also have merit as a potato late blight management strategy. Make sure to ventilate greenhouses and high tunnels to minimize leaf wetness.

Stake and prune tomatoes to promote air movement and reduce leaf wetness. Do not stake and prune when wet, as diseases can be spread by people and tools.

High hilling, and prevention of crack development in hills, can reduce the movement of late blight spores through the soil to tubers, thereby reducing tuber late blight risk.

Manage irrigation to minimize the duration of leaf wetness.  In many regions of the country, foliage becomes wet from dew during the early morning hours. If this occurs in your production area, irrigate during the early morning hours so the irrigation coincides with the leaf wetness period contributed by dew.  Alternately, irrigate during the middle of the day, so the foliage goes through a drying period early in the morning and again before dark. Do not irrigate in the afternoon if the foliage cannot dry before dark; wet foliage at dark will typically remain wet all night long, resulting in a very long wetting period and increased disease risk. If applicable, use drip irrigation to minimize irrigation-applied leaf wetness.

Weeds in the field impede airflow, so manage weeds. Volunteer tomatoes and potatoes, and the weed hairy nightshade, are hosts to late blight, so specifically eradicate these plants in your fields.

As an organic farmer you may wonder whether scouting is of any value, as most late blight management strategies available must be in place BEFORE late blight is observed.  However, scouting is of value for several reasons: 1) You will know whether or not you have late blight in a specific field. If you DON'T have late blight in a field, you will not have to take precautions before, during and after harvest, and in subsequent years in that and neighboring fields, to minimize late blight survival and spread. 2) If first symptoms are detected immediately, the few reactive management strategies available to you could be employed, such as destruction of plants, more frequent copper applications, more strict irrigation management, or if the crop is close to harvest, immediate foliage destruction and subsequent crop harvest.

Copper products can effectively control, or slow down, late blight epidemics. Copper products have no "kick-back" activity. Therefore, they need to be applied to all plant surfaces before infection (before symptoms are observed in the field) and frequently so new foliage is protected as plants grow. In addition, they must be applied so ALL plant surfaces are covered, including the undersides of leaves where Phytophthora infestans sporulates (makes the spores that cause infections). Compost teas and other non-copper materials may have some efficacy. For more information see Organic Management of Late Blight of Potato and Totato with Copper Products.

NOTE: Before applying ANY copper product, be sure to 1) read the label to be sure that the product is labeled for the crop you intend to apply it to and the disease you intend to control, and 2) make sure that the brand name product is listed your Organic System Plan and approved by your certifier. For more information see Can I Use this Product for Disease Management on my Organic Farm?

Some studies have shown that destroying the first diseased plants in a field can stop or slow disease movement throughout the rest of the field.  It takes approximately three days to one week (depending on environmental conditions) from infection of a plant by the pathogen to development of symptoms. During that period, more infections are initiated on neighboring plants.  Therefore, by the time the first infected plants show symptoms, many neighboring plants are infected as well.  As the result, many apparently healthy plants must be destroyed in the area surrounding the first symptomatic plants in order to destroy infected, non-symptomatic plants.  Michigan State University research suggests that, under Michigan conditions, all plants in a 100 ft radius from the first symptomatic plants must be destroyed (Kirk et al., 2007).  A rigorous scouting program must be in place to detect the very first late blight symptoms in a field in order to make plant destruction effective.  In small fields, too many plants may have to be destroyed for this to be an effective management strategy.

Another strategy is to destroy ALL foliage in a diseased field to prevent spread of the disease to other plants and tubers, or to neighboring fields. For potatoes, destruction of all foliage in the field is only recommended during later stages in tuber bulking, as tubers will cease growth when the foliage is dead.