Late blight, which is caused by the pathogen Phytophthora infestans, is one of the most destructive and contagious plant diseases. Total crop loss is not unusual, especially if management practices are not used, because the pathogen directly affects fruit and kills plants. Disease progresses quickly under humid conditions, which are favorable for the pathogen, particularly when accompanied by cool temperatures plus rain, heavy dew, or fog. Late blight has been likened to wildfire by those whose plants have been afflicted. The pathogen produces an abundance of spores that are easily dispersed several miles by wind (up to 30 miles is possible). With such a contagious and destructive disease, not effectively managing late blight, even in a small garden, can have a detrimental impact on other tomato and also potato plants in farms and gardens. Late blight clearly is unlike many other diseases and cannot be “lived with”. 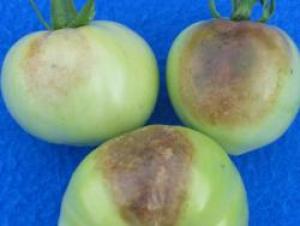 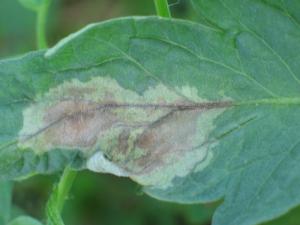 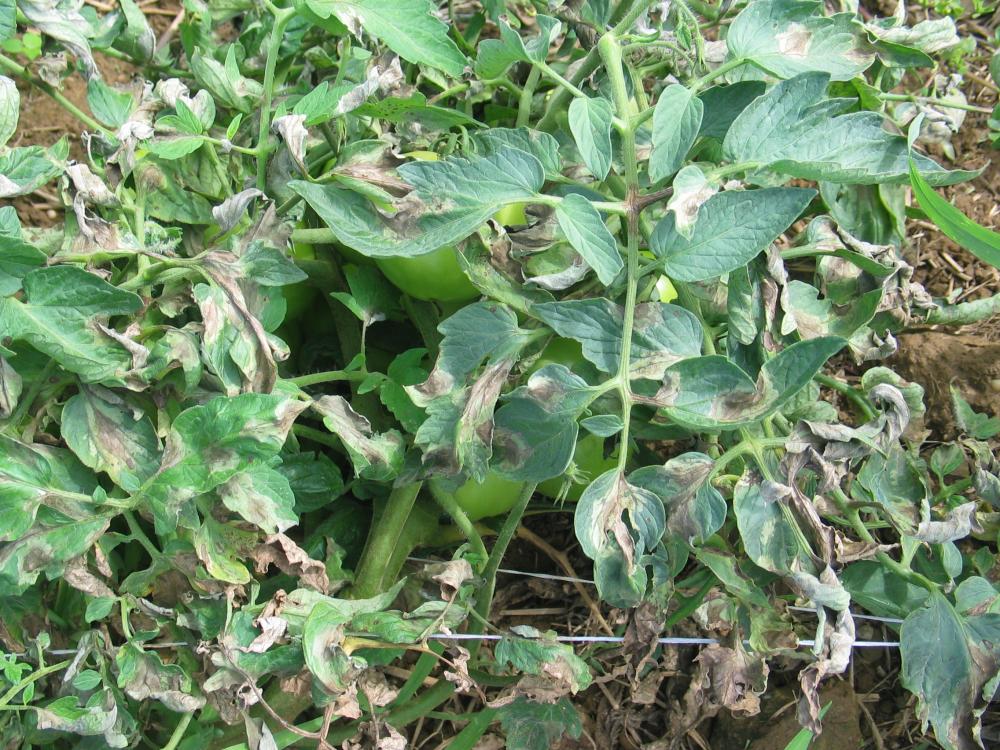 For more information on identifying late blight, see the eOrganic video Identifying and Scouting for Late Blight on Organic Farms.

Selection of resistant varieties is the best strategy for managing late blight. Late blight is most effectively managed with practices implemented before the disease starts to develop, or at the first sign. Unlike people and animals, plants cannot be cured of a disease, and there are no medicines (e.g. fungicides) that can make the symptoms disappear. With resistant varieties, the management practice is in place before late blight starts to develop. This is important, since late blight is nearly impossible to manage with fungicides under very favorable conditions for the pathogen.

For late blight, there are four major resistance genes in tomato and 24 genotypes of the pathogen identified in the United States as of 2014. The tomato resistance genes are Ph-1, Ph-2, Ph-3, and Ph-5 (Table 1). Another, Ph-4, was identified in Asia. These were derived from Solanum pimpinellifolium, a wild relative of tomato (Solanum lycopersicum). These genes are effective against some genotypes but not others. Ph-1 is not effective against the main genotype found recently in the United States (US-23).

Ph-2 and Ph-3 are the main genes being conventionally bred into hybrids. They are being bred singly or in pairs. Using pairs with either different genes (e.g. Ph-2 and Ph-3) or two copies of the same gene are strategies to achieve higher levels of resistance. A variety having one copy of a gene is heterozygous, while a hybrid with a copy from each parent is homozygous. Additionally, there is a new resistance gene (Ph-5) as well as unidentified resistance genes in older varieties, heirlooms, and wild types. Table 2 lists resistant varieties with information about their performance in recent field evaluations with whole plants, and laboratory assays with detached leaflets. Varieties with Ph-2 and Ph-3 exhibited the best suppression in recent evaluations (2012 and 2013) with US-23, the most common genotype in the Eastern United States. Varieties with just Ph-3 exhibited good suppression. While the resistance conferred by Ph-2 and Ph-3 was very good, the plants were not immune; thus some symptoms—albeit very few—were seen on leaves and fruit under high disease pressure. Additional information and photos of resistant varieties are available at: http://vegetablemdonline.ppath.cornell.edu/NewsArticles/Tomatoes-LB-Resistant2013.html 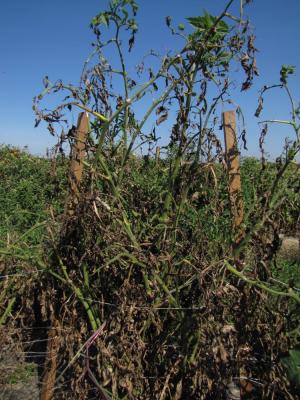 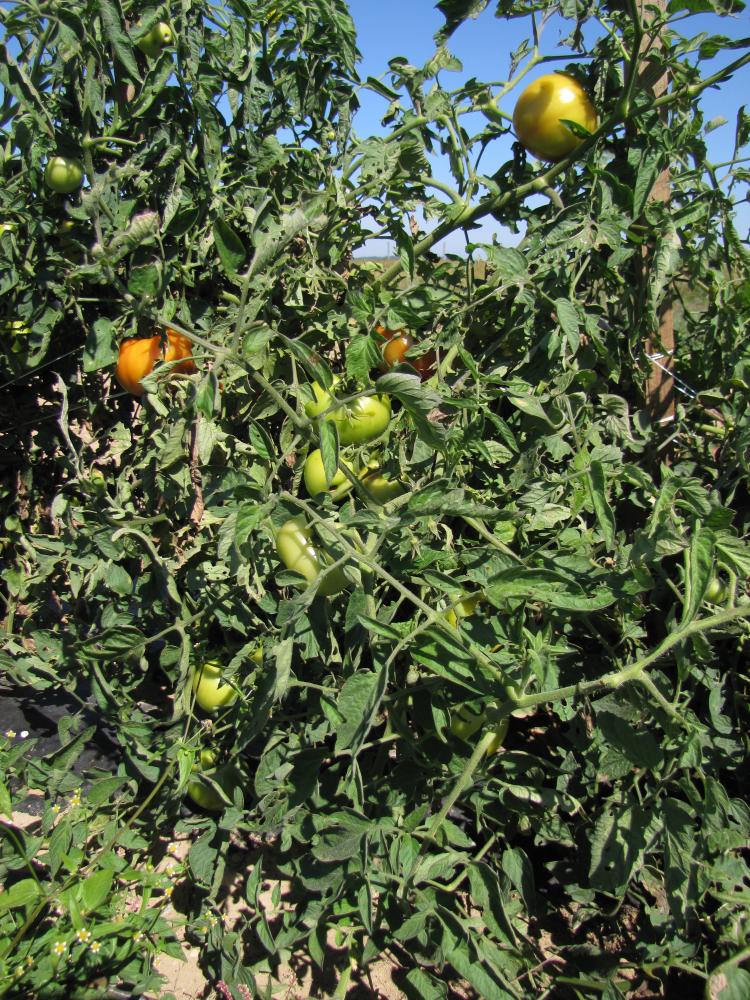 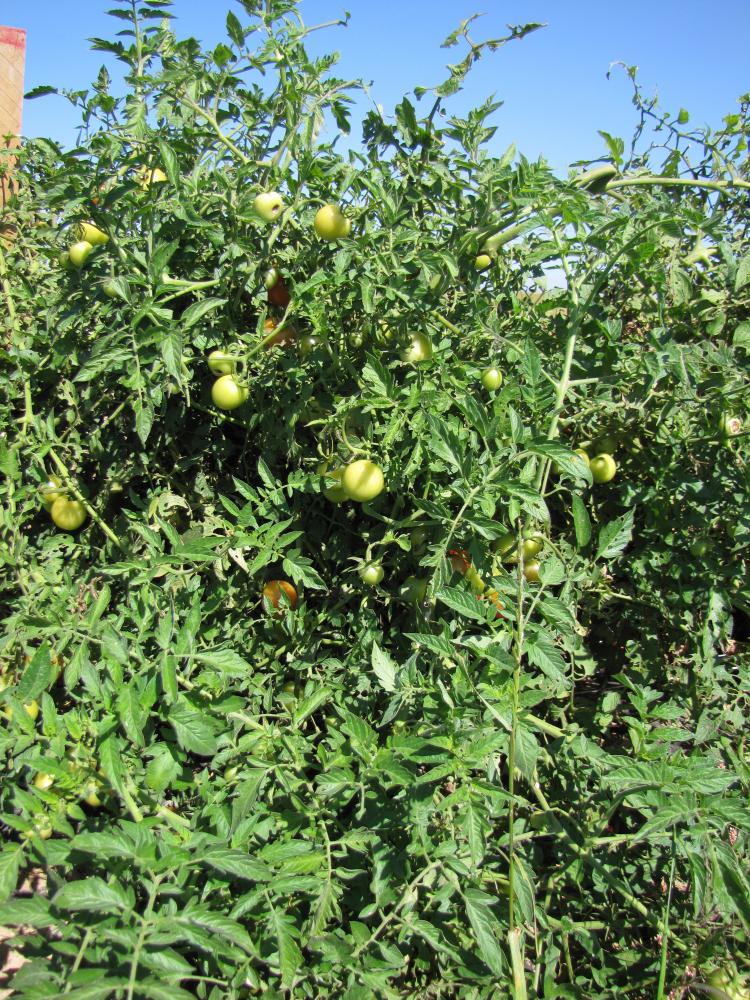 Genotypes of the late blight pathogen are named US-1 to US-24, with higher numbers assigned to those discovered most recently. Some of these (including US-22 and US-23) are more virulent (aggressive) on tomato than many of the first genotypes identified in the United States that were more virulent on potato (notably US-1 and US-8, which occurred in succession as the only genotypes found for many years). Presence of US-22 and US-23 is a primary reason why late blight has become a more important disease of tomato in recent years, especially in the Northeast. US-17 only infects tomato. US-24 is more virulent on potato than tomato. Genotypes of the late blight pathogen are being monitored in the United States. This information is valuable to guide selection of resistant varieties. While it is logical to expect genotypes common in one year to be more likely to occur the following year and in the same area, this has often not been the case. Phytophthora infestans can be moved long distances in plant material—especially potato tubers—which is primarily where this pathogen survives between growing seasons. Therefore, it is prudent to know what genotypes have been occurring throughout the United States and not just locally. Table 3 lists the genotypes detected since 2002, and Table 4 has information listed by state of samples processed from 2010 to 2013. US-23 was the most common genotype in 2012 and 2013. Additionally, there is a list of recent genotypes available online that contains more information about them (https://usablight.org/about-late-blight/recent-us-genotypes/). With current technology, it is possible within a few days to determine the genotype of the pathogen affecting a specific plant sample. Genotypes determined for samples submitted through the USAblight project are posted with the USAblight Late Blight Occurrence Map (https://usablight.org/current-map/). Click on a location in the list on the right side of this page to obtain information about the sample(s) submitted from this location. Monitor this site during the growing season to know when late blight has been confirmed near you, and to determine whether the genotype(s) detected will be controlled by resistant varieties you planted. If a genotype detected will not be controlled, be prepared to rely more heavily on organic-approved fungicides during the season. Sign up to receive alerts (http://usablight.org) for immediate notification when late blight is confirmed near you.

Key to successfully managing late blight is growing resistant varieties as one component of an integrated management program. No resistant plant variety is immune, thus some symptoms will develop even on the most resistant variety under high disease pressure. Briefly, other practices for managing late blight include destroying potential sources of the pathogen, applying fungicides preventively, routinely and thoroughly inspecting plants for symptoms, and monitoring the occurrence of late blight and genotypes of the pathogen (usablight.org). Certified organic operations need to be sure any fungicides are an approved input (see eOrganic article Can I Use This Input On My Organic Farm?). Additionally, take steps to contribute to community management of late blight by reporting suspected occurrence to local extension staff (http://nifa.usda.gov/partners-and-extension-map) or plant clinic (www.npdn.org/), notifying others growing tomato and potato near you when you have late blight, and promptly destroying affected plants when late blight cannot be managed.  Much more information about managing late blight can be found in the eOrganic articles Organic Management of Late Blight of Potato and Tomato and Organic Management of Late Blight of Potato and Tomato with Copper Products.

Table 1.  Genetics of late blight resistance in tomato varieties and what is known about their performance

Table 2.  Late blight resistant tomato varieties listed based on performance and fruit type with the most effective in the first section.  Comments about resistance are primarily based on results from replicated experiments conducted with field-grown plants.  Results also included from research with detached leaflets conducted under laboratory conditions.  Some observations are mentioned.

* Varieties susceptible to US-22, US-23, and US-24 in laboratory experiment with resistant varieties: Green Zebra and Roma.

Table 4. Genotypes of Phytophthora infestans detected in samples processed through the USABlight project
If there is no entry for a state in a year, it does not mean late blight did not occur there. Information about late blight occurrence is needed for states with no entries.

* Number of reports included when pathogen genotype not determined for samples from all late blight occurrences.