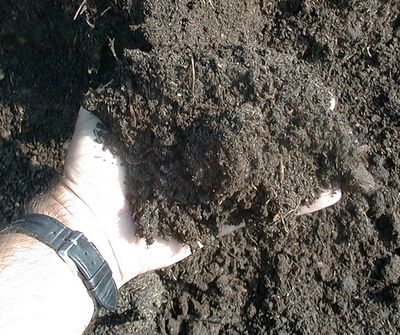 A key feature of organic farming systems is the utilization of organic residues as soil mulches and amendments in an integrated system to maintain and improve soil quality. Organic residues used for these purposes may be produced on the farm, or they may be imported from off-farm sources. Often, fresh organic residues produced in place are used in these practices, such as when cover crops are plowed down as a green manure to build soil organic matter and improve soil fertility, or rolled as a mulch in organic no-till systems to suppress weeds, reduce soil erosion, and conserve soil moisture. Organic residues may also be processed before being used to attain desirable qualities, such as when animal manures are composted to reduce volume and improve stability. Regardless of the circumstances, organic residues that are handled incorrectly can introduce otherwise avoidable problems to the farming system. For example, raw cattle manure may contain viable weed seeds and may spread an otherwise isolated weed infestation more broadly across the farm or, if the manure is imported from outside the farm, introduce a weed problem that previously didn't exist. Similarly, plant residues may be infected with pathogens that can infest subsequent crops. This article provides a brief description of the composting process, discusses the use of composting to reduce weed seeds and plant pathogens, and identifies issues that can lead to the failure of composting to reduce weed seeds and plant pathogens.

For the purposes of organic certification, the National Organic Program rule (United States Department of Agriculture [USDA], 2000) defines compost as:

Composting is the controlled management of the normal biological process of aerobic (in the presence of oxygen) decomposition of organic residues by microorganisms such as bacteria, fungi, and actinomycetes. This process is optimized when the various organic residues are mixed to provide certain conditions:

Under these conditions, populations of microorganisms will thrive and organic residues will be decomposed, consuming oxygen and releasing intermediate breakdown products, carbon dioxide, and heat. As the temperature of the pile rises, the community of microorganisms will go through a succession, culminating in thermophilic (heat-loving) organisms at temperatures above 113 °F (45 °C). If the mass of the compost pile is large enough to be self-insulating, temperatures within the pile during this active phase of composting may reach 131–170 °F (~55–70 °C) within 1–3 days. To maintain biological activity and to bring the active phase to completion, temperatures should be monitored and compost moisture and aeration should be maintained. After the most readily decomposable organic matter in the compost is consumed, biological activity will decrease in intensity, and temperatures and oxygen consumption will decline. The compost then enters the curing phase, during which decomposition proceeds more slowly and organic matter is converted to stable humic substances—the finished or mature compost.

See the related article, Making and Using Compost in Organic Agriculture, for more information about composting.

How does composting reduce weed seeds?

Several factors contribute to weed seed mortality during composting. In compost systems assembled and managed in accordance with requirements for organic certification, the most important factors are the interaction between weed species, temperature, time, and moisture (Eggley, 1990; Shiralipour and Mcconnell, 1991; Eghball and Lesoing, 2000; Larney and Blackshaw, 2003; Dahlquist et al., 2007). In general, the higher the temperature to which weed seeds are exposed during the active phase of composting, the higher the weed seed mortality. Similarly, the longer the duration of high-temperature exposure, the higher the weed seed mortality. Thus, Dahlquist et al. (2007) estimated that three of the six weed species they examined under controlled laboratory conditions were unaffected by temperatures of 108 °F, but 90% of the seeds of all six species were killed after less than three hours at 140 °F (Table 1). Furthermore, all six species suffered 100% mortality after less than an hour at 158 °F. Similarly, in Texas, Weise et al. (1998) found that, in composting manure at 35% moisture, barnyardgrass, pigweeds, and kochia seeds were killed after three days at 120 °F; Johnsongrass seed was killed with three or more days of exposure at 160 °F; but field bindweed seeds were killed only after seven days at 180 °F.

Susceptibility of weed seeds to thermal mortality, however, is influenced by the moisture content of the compost; weed seeds in a dry environment are able to survive higher temperatures for longer times than seeds in a moist environment. Some (Egley, 1990; Thompson et al., 1997) have suggested that thermal mortality may be greatest for fully imbibed seeds—seeds that have absorbed water and split their seed coat in the process of germination. In Nebraska, Eghball and Lesoing (2000) showed that adding water to beef manure compost greatly enhanced weed seed destruction; moist compost was faster and more effective at killing cocklebur, morningglory, pigweed, sunflower, velvetleaf, foxtail, smooth brome, and shattercane than dry compost, in part due to higher compost temperatures.

Other factors are thought to contribute to weed seed mortality during composting. Larney and Blackshaw (2003) observed considerable variability in the relationship between temperature exposure in windrows and seed viability for a number of weeds, and concluded that additional factors, such as germination into lethal conditions or pathogen infestation, were contributing to weed seed mortality. Others have implicated plant-toxic compounds that accumulate to sufficiently high concentrations during composting (phenols, ammonium, and acetic acid, for example) in weed seed mortality and suppression of germination (Eghball and Lesoing, 2000; Shiralipour and Mcconnell, 1991).

How does composting reduce plant pathogens?

Several factors are known to contribute to the eradication of plant pathogens and nematodes during composting (Noble and Roberts, 2004):

Of all these factors, heat generated during the active phase of the composting process appears to be the most important in pathogen destruction.

Bollen et al. (1998) found that only two of 17 plant pathogens investigated—Olpidium brassicae and one form of Fusarium oxysporum—survived when exposed to small-scale static pile composting of infected plant residues, and then only at greatly reduced levels. Thermal mortality during the active phase of composting was found to be the most important factor affecting pathogen destruction.

In California, Downer et al. (2008) found that unturned piles of fresh and aged green waste (note that these piles would not have satisfied organic certification requirements) did not uniformly expose pathogens to lethal temperatures. They recommended that green waste stockpiles should be turned intermittently to mix pile contents and move propagules to a part of the pile where they would be more likely to be killed by heat, microbial attack, or chemical degradation that occurs during active aerobic composting.

What can go wrong?

Improperly assembled and maintained piles or windrows may not reach high enough temperatures during the active phase of composting for killing all weed seeds and pathogens. Failure to reach adequate temperatures can have several causes:

To avoid these problems, assemble raw materials carefully to achieve the proper starting conditions of C:N, moisture, pile porosity, and size; monitor temperature and moisture conditions; and turn/aerate as needed to maintain a biologically active, aerobic environment. Excellent resources providing detailed instructions and guidelines for composting include The Art and Science of Composting (Cooperband, 2002), Composting on Organic Farms (Baldwin and Greenfield, 2009), and On-Farm Composting Handbook (Rynk, 1992).

Temperatures at the edges and surface of compost piles and windrows may not be sufficient to kill weed seeds and pathogens. This is an especially important risk in static piles that are not turned and mixed during the active phase of decomposition, but rely on forced aeration to maintain an aerobic environment. Thorough mixing or turning during the active phase is essential to ensure that all the material achieves elevated temperatures for a long enough period of time to kill weed seeds and pathogens.

Dry heat is less effective than moist heat at killing weed seeds. Ensure that moisture content of the pile or windrow is maintained at 40–60%.

Finished compost can become recontaminated with weed seeds if weeds are allowed to grow and go to seed on or adjacent to the pile or windrow. Similarly, compost can become contaminated with vegetative reproductive structures from some weeds—Canada thistle and rhizomateous grasses, for example—if they are allowed to grow on or adjacent to the pile. Keep vegetation adjacent to stored compost mowed short, and tarp piles or windrows to prevent contamination by wind-blown weed seeds. When moving or spreading finished compost, avoid picking up soil or other contaminants from under or around the pile or windrow.