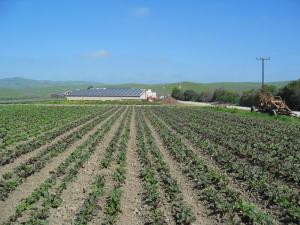 Years in organic management: Phil Foster Ranches (PFR) began in 1989 and was certified organic with California Certified Organic Farmers as of 1990. The Santa Ana Ranch (SA) in Hollister has been managed organically by PFR since 1989. The San Juan Ranch (SJ) in San Juan Bautista started in 1993 with one ranch. Additional ranches/fields were added in 1996, 2012, and 2015. All ranches were farmed conventionally prior to PFR's management and then transitioned to organic.

Climate and soils: PFR's climate is semiarid (12 to 15 inches of precipitation) with a frost-free growing season of 275 days. Average last frost is early April, and average first frost is in November. Most precipitation falls between November and March. Summer temperatures reach the high 90s in Hollister and high 80s in San Juan Bautista. Winter lows are regularly several degrees below freezing at both ranches, but Hollister has some higher ground to the east which can be almost frost-free. Strong northwest afternoon winds are common, particularly in San Juan Bautista and during the summer. Soils on each ranch vary, but are mostly classified as capability class I and II by the USDA Natural Resources Conservation Service and rated as "good" for agricultural use (Fig. 5: Santa Ana Ranch Soils Map, Fig. 6: San Juan Bautista Ranch Soils Map).

Building community among employees and customers is a key goal. Profit sharing, above-industry wages, health care, and a commitment to team building means that a mostly long-term, year-round workforce is caring for the farm. PFR sales focus on the local community as much as possible, with a weekly farm stand and several farmers markets. Foster chooses the best-tasting crop varieties rather than the best yielding or most attractive. PFR has a strong commitment to sustainability, and practices water and energy conservation (see https://pinnacleorganic.com).

None of the above would be possible if the business was not profitable in the short and long term. PFR pays close attention to personnel management and retention, crop management, recordkeeping, marketing, and food safety to ensure long term profitability and sustainability.

Since 1989, PFR has achieved most of its target soil health metrics, including increases in SOM of about 100% and 50% at Santa Ana and San Juan Bautista, respectively; a substantial increase in CEC (Santa Ana); mostly optimal levels of nitrate-nitrogen; adequate levels of potassium and copper; high levels of calcium and sulfur; and increased calcium as a percentage of cation balance. PFR has also maintained soluble salts levels below those that cause plant injury. Targets yet to be achieved include higher CEC (San Juan Bautista), lower phosphorus content, decreased magnesium as a percentage of cation balance, lower pH, and higher soil contents of iron, manganese and zinc.

Overall, crop yield and quality losses to insects decreased from 1989 through 2013, according to Foster and O'Brien. This observation is supported by reduced insecticide use documented in pesticide records, good crop yields documented in yield records, and insect pest severity documented in crop-scouting records.

PFR's disease management system has been mostly effective. Many diseases common to the Monterey Bay area do not occur, or are sporadic and inconsequential. Several diseases are effectively managed. Four diseases remain chronic problems: garlic rust; downy mildew of cucumber; Verticillium wilt of watermelon; and Fusarium basal rot of onion, garlic, and shallot.